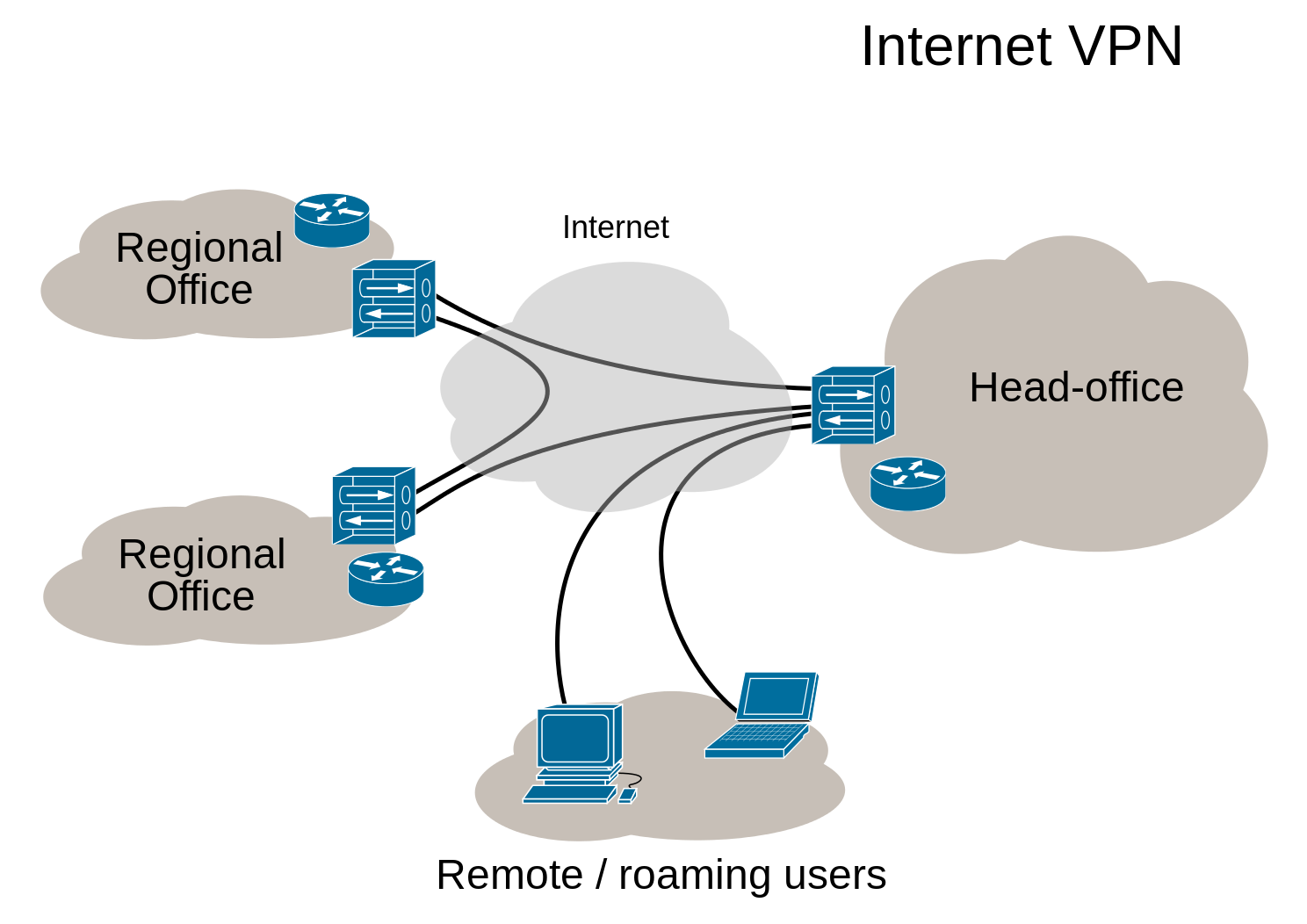 Companies use this technology for connecting branch offices and remote users (road warriors).

Creating a single secured private network with multiple branch offices connecting to a single site can easily be setup from within the graphical user interface. For remote users, certificates can be created and revoked and a simple to use export utility makes the client configuration a breeze.

OPNsense offers a wide range of VPN technologies ranging from modern SSL VPNs to well known IPsec as well as WireGuard and Zerotier via the use of plugins. 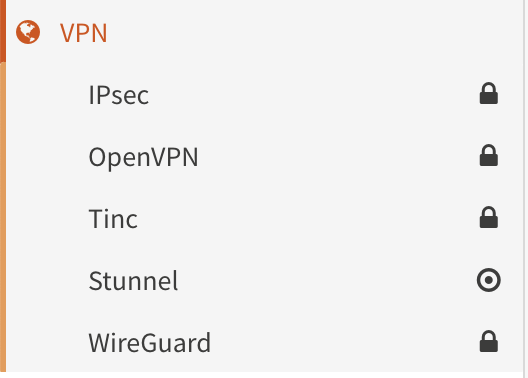 Since IPsec is used in many different scenario’s and sometimes has the tendency to be a bit complicated, we will describe different usecases and provide some examples in this chapter.

The IPsec module incorporates different functions, which are grouped into various menu items. Since the start of our project we have been offering IPsec features based on the legacy ipsec.conf format, which we are migrating to swantcl.conf as of version 23.1. While migrating the existing featureset we came to the conclusion that the world has changed quite a bit and in order to offer better (api) access to the featureset available we decided to plan for deprecation of the legacy “Tunnel settings” as they have existed since we started. No timeline has been set, only a feature freeze on tunnels using the “Tunnel settings” menu item.

One of the main goals for the long run is to better align the gui components so they reflect the reality underneath, as we use strongswan, our aim is to follow their terminology more closely than we previously did.

The following functions are available in the menu (as of OPNsense 23.1):

When migrating Pre-Shared Key type tunnels to connections, make sure to add an entry in the “Pre-Shared Keys” module as well. If both ends should use their own identifier, fill in both local and remote values. The legacy module requested this information in the phase 1 page and wrote the same information to the secrets.

In order to pass traffic over an IPsec tunnel, we need a policy matching the traffic. By default when adding a phase 2 (or child) policy a “kernel route” is installed as well, which traps traffic before normal routing takes place.

Without a policy in place for the tunnel, traffic won’t be accepted, in case a policy with a kernel route overlaps a local or locally routed network the traffic will not be received by the host in question.

When setting up IPsec VPNs there are two main types of scenario’s with their own advantages and disadvantages.

The first one is the standard policy based tunnel, which guards the security of the tunnel with policies and installs kernel traps to send traffic over the tunnel in case it matches these policies. For example a local network 192.168.1.0/24 sending traffic to a remote location responsible for 192.168.2.0/24. The advantage of this scenario is the ease of setup, no routes are needed to be configured, when in this example 192.168.1.10 contacts 192.168.2.10 the packets are seamlessly forwarded over the tunnel to the remote location.

When local traffic doesn’t match the policies in question due to the tunnel needing Network Address Translation, that’s also possible as long as policies are manually added to the security policy database, this is also referred to as “NAT before IPsec”.

Route based, also known as VTI, tunnels are using a virtual interface known as if_ipsec(4), which can be found under VPN -> IPsec -> Virtual Tunnel Interfaces. This links two ends of the communication for routing purposes after which normal routing applies. The “(Install) Policies” checkmark needs to be disabled in this case for the child (phase 1 in the legacy tunnel configuration) definition. Usually the communication policy (phase 2 or child) is set to match all traffic (either 0.0.0.0/0 for IPv4 or ::/0 for IPv6).

The advantage of this type of setup is one can use standard or advanced routing technologies to forward traffic around tunnels.

Currently it does not seem to be possible to add NAT rules for if_ipsec(4) devices.

In order to reliably setup a VTI tunnel, both ends should use static ip addresses. Although in the legacy configuration it was possible to resolve hostnames, this will never lead to a stable configuration as the if_ipsec(4) device matches both source and destination [#] before accepting the traffic and has no knowledge about any external changes.

IPsec may also be used to service remote workers connecting to OPNsense from various clients, such as Windows, MacOS, iOS and Android. The type of client usually determines the authentication scheme(s) being used.

In case clients should be offered default settings, these can be configured from VPN -> IPsec -> Mobile Clients. Pool options (Virtual IPvX Address Pool) on this page will be used by the legacy tunnel configuration only, when using the new connections module one may configure different pools per connection.

The examples section contains various options available in OPNsense. When using the new “connections” option available as of OPNsense 23.1, different examples from Strongswan are usually quite easy to implement as we follow the swantcl.conf format quite closely in the new module.

The following client setup examples are available in our documentation:

This paragraph offers examples for some commonly used implementation scenarios.

Using Network Address Translation in policy based tunnels is different, due to the fact that the installed IPsec policy should accept the traffic in order to encapsulate it. The IPSec BINAT document will explain how to apply translations.

The number of examples for the new module on our end is limited, but for inspiration it’s often a good idea to walkthrough the examples provided by Strongswan. Quite some swanctl.conf examples are easy to implement in our new module as we do follow the same terminology.

Depending on the workload (many different IPsec flows or a single flow), it might help to enable multithreaded crypto mode on ipsec, in which case cryptographic packets are dispatched to multiple processors. In order to do so, add or change the following tunable in System ‣ Settings ‣ Tunables:

To distribute load better over available cores in the system, it may help to enable receive side scaling. In which case the following tunables need to be changed:

In order to keep track of the connected tunnels, you can use the VPN -> IPsec -> Status Overview to browse through the configured tunnels.

The VPN -> IPsec -> Security Policy Database is also practical to gain insights in the registered policies, when NAT is used, the additional SPD entries should be visible here as well.

When troubleshooting problems with your firewall, it is very likely you have to check the logs available on your system. In the UI of OPNsense, the log files are generally grouped with the settings of the component they belong to. The log files can be found in the “Log file” menu item.

When trying to debug various issues, the amount of log information gathered can be configured using the settings in VPN -> IPsec -> Advanced Settings.

In some (rare) cases one might want to add custom configuration options not available in the user interface, for this reason we do support standard includes.

While the swanctl.conf and the legacy ipsec.conf configuration files are well suited to define IPsec-related configuration parameters, it is not useful for other strongSwan applications to read options from these files. To configure these other components, it is possible to manually append options to our default template, in which case files may be placed in the directory /usr/local/etc/strongswan.opnsense.d/ using the file extention .conf

IPsec configurations are managed in swantcl.conf format (as of 23.1), merging your own additions is possible by placing files with a .conf extension in the directory /usr/local/etc/swanctl/conf.d/.

Files added to these directories will not be mainted by the user interface, if you’re unsure if you need this, it’s likely a good idea to skip adding files here as it might lead to errors difficult to debug.

One of the main advantages of OpenVPN in comparison to IPsec is the ease of configuration, there are less settings involved and it’s quite simple to export settings for clients.

OpenVPN on OPNsense can also be used to create a tunnel between two locations, similar to what IPsec offers, generally the performance of IPsec is higher which usually makes this a less common choice.

When using the site to site example with SSL/TLS instead of a shared key, make sure to configure “client specific overrides” as well to correctly bind the remote networks to the correct client.

Mobile usage is really where OpenVPN excells, with various (multifactor) authentication options and a high flexibility in available network options.

The mechanism of client overrides utilises OpenVPN client-config-dir option, which offer the ability to use specific client configurations based on the client’s X509 common name.

It is possible to specify the contents of these configurations in the gui under VPN -> OpenVPN -> Client Specific Overrides. Apart from that, an authentication server (System -> Access -> Servers) can also provide client details in special cases when returning Framed-IP-Address, Framed-IP-Netmask and Framed-Route properties.

Radius can be used to provisioning tunnel and local networks.

A selection of the most relevant settings can be found in the table below.

When configuring tunnel networks, make sure they fit in the network defined on the server tunnel itself to allow the server to send data back to the client. For example in a 10.0.0.0/24 network you are able to define a client specific one like 10.0.0.100/30.

To reduce the chances of a collision, also make sure to reserve enough space at the server as the address might already be assigned to a dynamic client otherwise.

Via plugins additional VPN technologies are offered, including: