Multi WAN scenarios are commonly used for failover or load balancing, but combinations are also possible with OPNsense.

To setup Failover the following step will be taken:

Did you know you can browse quick and easy to the right page by using the search box in the top right corner of your screen? Like this: 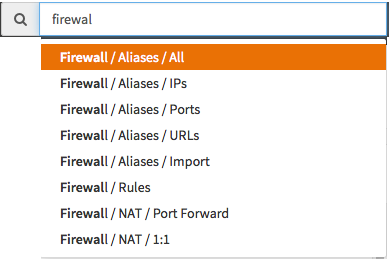 Our example utilized two previous configured WAN gateways that both are confirmed to function separately. As DNS’s and monitor IPs we will utilize google’s DNS services 8.8.8.8 and 8.8.4.4, of course you can use your own ‘known good’ setting.

We defined WAN and WAN2, where WAN will be our primary (default) gateway.

You may skip this step if you already have setup the monitoring IP and both gateways are shown as online.

To add a monitoring IP go to System ‣ Gateways ‣ Single and click on the first pencil symbol to edit the first gateway.

Use the following settings:

Step 3 - Configure DNS for each gateway¶

Go to System ‣ Settings ‣ General and make sure each gateway has its own DNS setup: like this:

For our example we will update the default LAN pass rule. Click on the pencil next to this rule (Default allow LAN to any rule).

Save and Apply changes

Add a rule just above the default LAN allow rule to make sure traffic to and from the firewall on port 53 (DNS) is not going to be routed to the Gateway Group that we just defined.

Start with pressing the + icon in the bottom left corner.

When using Unbound for DNS resolution you should also enable Default Gateway Switching via System->Settings->General, as local generated traffic will only use the current default gateway which will not change without this option.

For each gateway there are several advanced options you can use to change the default behavior/thresholds. These option can be changed under System ‣ Gateways ‣ Single, press the pencil icon next to the Gateway you want to update.

The current options are:

To setup load balancing follow the same configuration procedure as for Failover, but in step 2 choose same Tier for both Gateways.

This will change the behavior from failover to equal balancing between the two gateways.

Some web sites don’t like changing request IPs for the same session, this may lead to unexpected behavior. To solve this you can use the option Sticky Connections, this will make sure each subsequent request from the same user to the same website is send through the same gateway.

To set this option can be set under Firewall ‣ Settings ‣ Advanced.

If you have a non symmetric setup with one IPS having a much higher bandwidth than the other then you can set a weight on each gateway to change the load balance. For instance if you have one line of 10 Mbps and one of 20 Mbps then set the weight of the first one to 1 and the second one to 2. This way the second gateway will get twice as many traffic to handle than the first.

To do so, go to System ‣ Gateways ‣ Single and press the pencil icon next to the Gateway you want to update. The weight is defined under the advanced section.

To combine Load Balancing with Failover you will have 2 or more WAN connections for Balancing purposes and 1 or more for Failover. OPNsense offers 5 tiers (Failover groups) each tier can hold multiple ISPs/WAN gateways.